Have you ever saw someone totally shattered as he is revealed from within himself his true nature and intentions? As an expectator is the most amusing experience and it hardly fade off your memory. It's been a couple of days since my last entry. You do remember, don't you? Faust wanted me to give him something to keep Margaret's mother away, and I did. Still, Faust has been walking around in circles holding onto the little bottle I gave him, and Margaret's need didn't stop growing, growing into frustration and even sadness. You can't even begin to imagine the passion with which that girl loves. And I'm constantly receiving those feelings, I feel them as my own, and I couldn't bear that anymore. it's totally alien from me, those are thoughts that are not my own, feeling I've never experiences, it's horrible. At the same time it's... kind of pleasant, knowing that having that girl sharing her sorrow with me, so closely, so privately, would be the closest I would ever be to feel with my own skin, flesh and bones the actual state of a human being at their worse, still that's not a priority, it drains all my energy and it inferferes with my work. I wanted to confront Faust about this, ask him to retrieve the cross and give it back to me or just comfort her and do whatever he needed to do with her. When I entered his room, I was only received with eyes filled with despair. I tried to ignore that, and tried to persuade him, but he instantly shut me down. “Please, don't bring desire in when I still have her image in my mind. The last thing I need right now is your presence.” Yes, he was constantly trying to not fall victim to the ghosts of the memories of her hands, her hair, her gaze, her kisses, and he was at the verge of madness. “Tell me why, Mephistophiel, can't I be content with this. Why can't I stop wishing to go even further, why won't my body stop screaming at my mind the impious longings it needs to have fulfilled.” I frowned, I cringed, my whole body flinched like his, he was grabbing his shoulders as if he was helplessly trying to hold back all the greed that was about to pour from his body. How can a man that never had faith in god be so religious? How can the self proclaimed damned by god, still try to appeal to the holy commandments? Now I was annoyed, no, that's a light word. I was disrespected. “What does my presence even mean to you, how can you be so delusional?” I cried.“Go with her, go relieve her sadness, she's waiting for you, you fool! as you're crying, acting as if there's any salvation for you!”

I'm so glad that I could finally make Faust give up. He still had the doctor inside him... Now the doctor is dead, and Faust could finally break free from that shell. It's the third day that he has left me all alone during the night in his laboratory. Surprise, Margaret took responsability, she now has an active role in all of this. I feel so sad for her mother! Having such a selfish little daughter- I can't help to laugh at all of this. I'm not sure if it's appropiate for me to claim Margaret as other of my victims, but her conduct was obviously warped for the worse, at least that's what I would say guiding me from this place's vulnerable moral setting. It's better for me. But still, something is wrong, I'm not sure if they know that they are slowly killing her, abusing of the dosage and administration. Not my problem, though. Now things are much quiet in my head, it's very silent. I almost miss all the ruckus. Also miss Faust bossing me around all day. But I think it's time to let him go, I got too attached, felt very strong emotions during this period of time. I swear, this was all so out of character... I'm sure he doesn't have much more time here anyways... Does he?

Tonight I decided to practice some cartomancy, because my magic skills are getting a little bit rusty. Just some simple three-card spread calling past-present-future for each one of us since I'm not fond of fortune-telling. 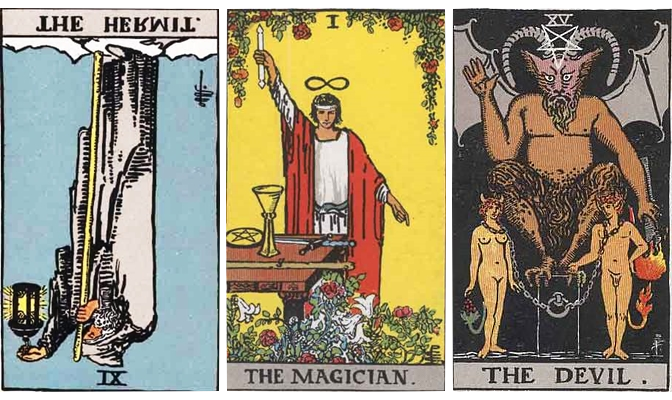 Here's Faust's reading. I was expecting for the Hermit to come out, it was so obvious. And I'm glad that he could break free from him since it was reversed, showing that his lone search for truth ended up getting him lost or stuck in his hazy ambitions. It's so good to see him transforming into a Magician! It's a card full of potential and dynamism, a healthy connection and mediation between the divine and terrenal (hand pointing upwards and the other pointing down). But as you see, the final outcome is The Devil, showing the victory of the terrenal, material and physical pleasures and attachments, or it might refer to dependence or subordination. I first though that this had to do with my victory over Faust's soul, but these readings got a little more complex when I did Margaret's spread and then mine, please keep reading. 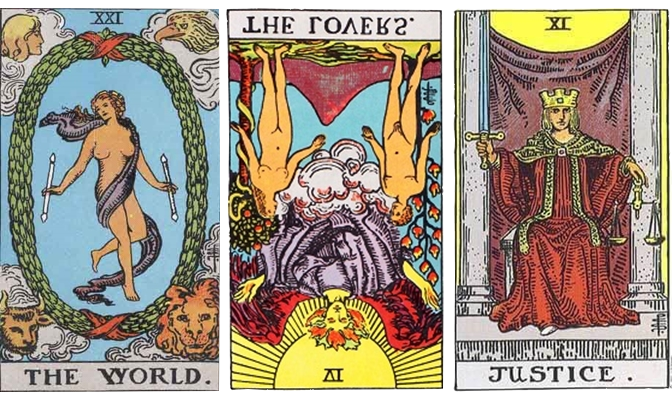 Here's Margaret's reading. It starts with the World, a card who shows the peace that brings wholeness and completion. I bet she was a girl who was happy and satisfied with the humble, quiet life she had until then. It's a little sad seeing The World transforming into The Lovers card, even worse since it's reversed, because it shows that the wholeness was split into two, and she's no longer happy and whole by just herself. I think that if Faust reciprocated her love properly, the card wouldn't appear upside down, and maybe the happiness would stay, even if it was dependant on two people being together. The spread ended with the Justice card, and I never was good understanding that card- Well it's not that I don't understand it, it's just too ambiguous to talk about it. It means that the consequences of one's deeds are coming, be them good or bad.

There's a little thing that concerns me about Margaret's and Faust spread, see the past reading for Margaret -The World- and the present reading for Faust -The Magician-. They both hold the same baton, The World has two, The Magician holds one. Did The Magician take this baton from The World to use it to connect himself to the divine, messing up with The World's wholeness? 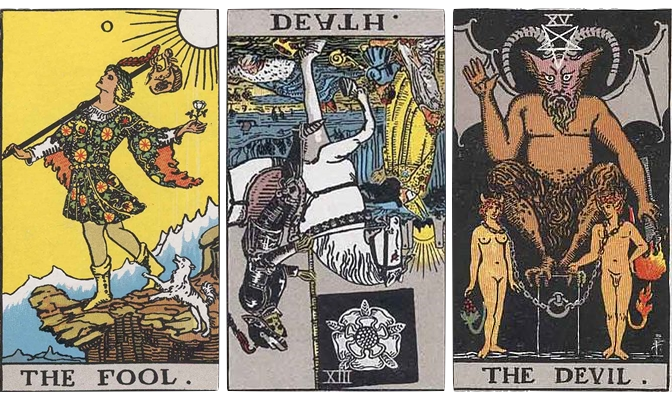 Here's my reading, and it starts in a very familiar way as always. I think The Fool might be a personal archetype of mine. I'm for sure childish, bold, free-spirited, and I don't care for the future at all, I walk gazing at the sky and not my path, I don't let anyone guide me. Then it appears a reversed Death card... meaning that I'm resisting some kind of change. I don't like spreading cards for myself, it scares me a lot because I don't like getting hints to guide me through my life, I don't like to get to know myself even more. But that's nothing, what it's really frightening is that I get The Devil for the future, and I share it with Faust.

After all of this I remembered why I don't like divination. The feeling of having the opportunity to control the outcome of my and other's actions is scary. It's something that gives me too much responsability that I can't handle, it weights too much in my back. I just escape it by choosing to be an ignorant. Anyways I don't plan on doing anything about this, I won't think this too much nor talk about Faust about these readings. Wouldn't it be a little rude if someone reads your fortune without consent? There's no need for him to know about this. He won't ask me about my business, he's been very distant lately, like I said in the last entry...uncomfrotable. I don't feel bad about it, it's okay. I feel really... numb? I don't know. I'm just doing my work as I was asked.