These day I escorted Faust during some more visits to her girlfriend's place, but knew I wasn't that useful anymore, Margaret started to sneak out of her house since her mother is very ill and is always in bed. My presence has even become a problematic, Faust told me that the girl started questioning him about his ideas, ocupation, religion stuff... And about me. The girl doesn't like me, she has told him that I'm not good company, that she feels like I'm not a good man. Such a perceptive little girl, but sadly for her I'm not leaving his side anytime soon, I'll stay until he succumbs. Faust won't ever escape me. Sadly for me, Faust has asked me to stay away from them. Whatever.

So, now I have more time for myself, for my thoughts... Alone with my thoughts again. Damn, I'm sorry to keep bothering you with my feelings, but I'm so stressed right now, I feel weird and disgusting. Disgusting because I found out that I'm not mad, I'm just a little jealous (Wasn't it obvious, my dear reader? I just became aware by reading my own words), that can be the reason or the consequence of me liking Faust a little bit. It's normal for me to like my masters out of feelings of jealousy and envy, but who knows what is really going through my head. I'm just really lean towards vulnerable people like him, and I can't help getting attached. I wish he would again get closer, looking for some comfort in my arms, I wish I could make him cry, I want to wipe his tears away from his face again.

Faust has a burden of many years, he is a mature adult, but he still looks very handsome. His skin is very pale and easily shows the warmest shades of pink, his eyes are black and so is his hair. Before, he wore it long and unkept, and the first thing I did with him is cutting it and giving him a clean shave, and I ended up perplexed at how attractive he looked when well groomed. He has a manly stare, but he's always clenching the muscles around his forehead, not in an aggresive demeanor but in a scared one. He constantly looks worried about something, uncomfortable. I always scold him for that, but I think he looks adorable, how he's always on the defensive.

He's a little bit taller than me, I catch up to him when I wear my heels. I haven't talked much about my appearance, right? I know I talked about how confused this body makes me feel from time to time, but I try hard to have a healthy relationship with it. Now I'm wearing my hair long, it's curly and it has a nice warm tone. I look like an adult male, maybe one that wants to attract attention from other males, kind of. When I'm engaged to a woman I try my best to look like a normal man and highligh my masculine features, but I just feel better stying on the feminine side, you know, painting my lips and nails and wearing high heels and corsets to shape my figure, letting my curls fall down free over my chest, wearing frills and lace. It's so nice! It makes me feel beautiful and confident, men's fashion is incredibly boring and dull.

But that says nothing about me. Actually I enjoy the company of women much more, and I prefer them over men. They are so much soft, delicate and vulnerable, much more passionate and romantic. Men act as if they were emotionally castrated, have a lot of delusions of grandeur and usually treat me like shit. Also, I don't know what's their obsession with treating men who behave differently as if they were lesser beings. At least I'm here to prove otherwise and remind the men who approach me that I'm not a passive vulnerable doll to .

Which makes me thing that maybe I like Faust because his passive attitude... I'm such a comformist. Yes, he often gets mad at me, but he never disrespected me, and never gave me bad looks or questioned the way I present. He has also shown me emotions, and that's what most captivates me of humans, and he's really making me wish to stay with him a little longer to see how far can I go ruining his life. I was doing alright, finally letting go the idea of extending my stay on earth as much as possible! Thinking that it would soon be all over... but now he's taking it slow with Margaret. Is he giving me another oportunity? Is he controlling himself, or getting more ambitious? Whatever it is it makes me both happy and confused as fuck! Probably doesn't revolve around me as I always think, but anyways I'll take advantage of this, I'll leave Faust for some time, let him take a vacation from his servant now that he's so pleased with Margaret, I'll use some days to take a rest. 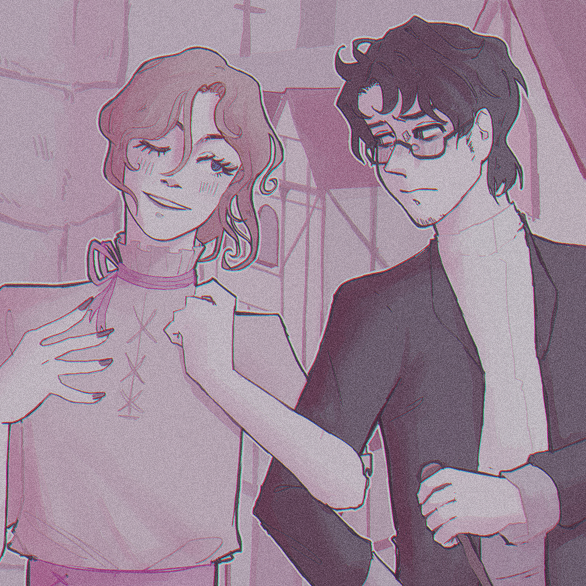 I think we look nice together.

The more I write about him, the more I force myself to think about all of those details I like about him, and I... kind of fall more and more for him. Damn. I can't believe I typed this. This is so embarrassing and wrong, I don't like it, and I should stop. BUT IT MAKES MY CHEST THROB WITH SO MUCH EXCITEMENT. It's probably better if I do as I just said, take some short vacations and come back, just to calm down, get me entertained, get some company to stop being all alone with my thoughts that are troubling me so much.